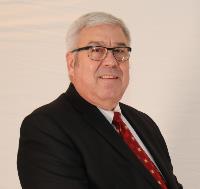 Dennis Charnesky, DDS, MAGD, is the new Regional Director for Region 9. He represents both Michigan AGD and Wisconsin AGD. He began serving in this position November 2017. His goal is to make the transmission of information more seamless from the national AGD to his constituentcy: “An informed AGD can be much more effective.”

His alma mater is the University of Detroit, where he earned his undergraduate degree in 1972 and DDS in 1974. He has practiced general dentistry for 43 years total — 42 of those years were spent in Troy, Michigan. Charnesky joined AGD in 1977. He earned his Fellowship in 1982 and his Mastership in 2001.

Since joining the Michigan AGD Board in 1982, AGD has been the primary way he has chosen to give back to the profession. He has served in almost every Michigan AGD position, including as president three times. He was co-chair of the state CE Committee for over 20 years. Nationally, he has been a delegate over 20 times, served on (and later chaired) the Group Benefits Council and was Division Coordinator for the Education Division.

Charnesky encourages anyone interested in AGD leadership to voice their concerns to local leaders, join committees and volunteer to help in other ways that match their own talents and skills: “Offering to work on national committees can be most rewarding personally and professionally. All tasks are important to the well-being of the Academy.”

Charnesky enjoys spending his personal time with his wife of 40 years, Sharon. He has three children, four grandchildren and three grand-dogs, who are his delight. His passion is the study of alternative medicine and its use in helping people suffering from distress.