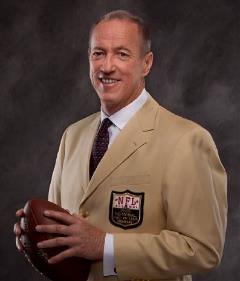 The Academy of General Dentistry, with the support of the AGD Foundation, is pleased to announce the AGD2020 keynote speaker will be Pro Football Hall of Fame quarterback and oral cancer survivor Jim Kelly. He is known for his toughness on and off the field.

Jim Kelly grew up in East Brady, a small town in Pennsylvania and was one of 6 brothers. Growing up with 5 brothers taught him toughness from an early age and also instilled a desire to strive and excel. Jim credits much of his success to those formative years.

He attended the University of Miami as quarterback and developed into a Heisman trophy candidate. In a game senior year against Virginia Tech, he was blindsided and received a separated shoulder. Told by doctors he may never get his range of motion back, Jim was able to achieve his dream of playing at the next level thanks to hard work, dedication and family support.

In 1983 he was drafted by the Buffalo Bills with the 14th pick in the 1st round. Despite being drafted, Jim opted to play for the USFL as a Houston Gambler and was named USFL Player of the Year in 1984. When the USFL suspended operations, he went back to the Bills and began playing in 1986.

Jim Kelly was a Buffalo Bill for his entire NFL career; 1986 1996. He led the team to six AFC East Championships & four consecutive Super Bowl appearances. Even though the Bills did not come home with a Super Bowl Championship ring, they showed incredible resiliency by making it back four times in a row. No other team has been able to match this accomplishment. In 1997, he decided to retire from the NFL.

Although his toughness and determination on the field was impressive, Jim’s real legacy would be solidified after retirement. Jim’s only son, Hunter, was born in 1997 and was soon diagnosed with a fatal disease called Krabbe Leukodystrophy and was given a life expectancy of 2 years. Jim his wife Jill established the Hunter’s Hope Foundation to provide research with respect to Krabbe Disease other Leukodystrophies as well as being advocates for Universal Newborn Screening. Hunter celebrated 8 years of life until he was laid to rest August 5th, 2005.

On June 3rd, 2013, Jim Kelly announced that he was diagnosed with squamous cell carcinoma, a form of cancer in his upper jaw. He underwent surgery at a Buffalo hospital in June and reported to news outlets shortly after that the surgery was successful. In March of 2014 after a follow up test, it was revealed the cancer had returned. After undergoing radiation and chemotherapy treatments, doctors confirmed in September of 2014 after biopsies had been taken there was no sign of cancer.

On March 1st, 2018 after several tests were taken, it confirmed that the cancer had returned. After a successful surgery in which the cancer was removed, Jim began undergoing multiple reconstructive procedures to rebuild his upper jaw.

In July 2018 Jim received the Jimmy V Perseverance Award at the ESPY’s. In his speech he talked about the four F’s Faith, Family, Friends and Fans and asked everyone to “Make a difference today, for someone who is fighting for their tomorrow”.